The demand for continuous testing has created a renewed focus on test automation, due to several developments within IT. For example, technology as a whole, and commercial aspects. The popularity of agile approaches in all flavors from Scrum to DevOps is one of the main drivers of this development. There is a need for continuous improvement and "quality at speed", which consists of three pillars: shift-left, continuous testing and continuous feedback loop. 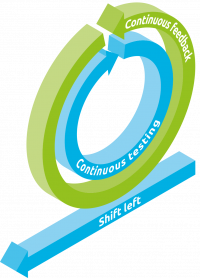 Test automation is one of the main opportunities to meet the need for test speed, but also requires a structured approach with acceleration assets in order to effectively realize such a vision. This can be achieved through a solution that addresses challenges like business alignment and automation maintenance.

Testers often struggle to determine what to test manually and what to test with automated test execution. The testing pyramid [Cohn 2009] can be used to make choices. The basic message of this testing pyramid is that testing should be automated as much as possible and be done as early as possible. And when deciding on test varieties, many testers find great support in the testing quadrants [Marick 2003, Crispin 2008]. Both models can be adjusted to a specific DevOps situation. The adjusted pyramid and/or adjusted testing quadrants are often described in a Way of Working or Definition of Done in DevOps or – at a higher level – are included in a Quality & Test policy. As an example, we have added our adjusted models.

Continuous testing is more than just automating tests. It is about the integration of test automation in the CI/CD pipeline, focused on getting feedback on the quality of the information system before and during delivery and deployment. Although we describe the ideal situation here, testing is not always part of a CI/CD pipeline. Alternative situations are possible, for example by testing COTS systems, SaaS systems, legacy systems or with a very specific pipeline of which testing cannot become a part.

Continuous testing is putting the proper amount of test automation (based on the risks to be covered) in the CI/CD pipeline. In order to achieve continuous testing, it is important to focus on executing the right tests at the right time and and at the right speed. A well thought-through test strategy is therefore very important.

Another step that will help move towards continuous testing is cloud adoption by virtualizing the entire test environment. Additionally, DevOps teams do not need to provision entire environments as they can use service virtualization tools to virtualize parts of the environment that are either unavailable for testing, are still in development, or are third-party services. With automation, complete, ephemeral (volatile) test environments can be created on demand and decommissioned when testing is complete, reducing both the time as well as the expenses associated with maintaining environments. Cloud technology can help with this, and the adoption of cloud for the creation of virtual test environments is a logical next step for automating the delivery pipeline. For more information about infrastructure please refer to the chapter on DevOps Infrastructure.

How to achieve continuous testing?

To achieve continuous testing, there are certain prerequisites that must come into place:

The need for continuous improvement of test speed, coverage and quality has led to a situation in which organizations have "islands of automation" in their IT delivery lifecycle that are chained together with manual processes. Since the entire system can move only as fast as its slowest component, the whole process is unable to scale up to the demands of efficiency and speed.This situation is further complicated by increasingly complex architectures and the lack of visibility for all teams into the development pipeline.

The quality and test policies are enablers for test orchestration as they align test automation activities over teams, which is a precondition for gathering information for real-time end-to-end-focused dashboards that inform about the confidence to establish the pursued business value.

The next step is to address silos of automation with orchestration. In the realm of testing, test orchestration eliminates "islands of automation" by combining manual and automated tasks in a holistic fashion. It links together individual, automated tasks, which helps organizations move from spending time on manual handoffs, dependencies, wait times, and cycle waste to one in which test generation and execution are fully integrated as part of a fully automated and optimized continuous delivery (CD) pipeline.

Testing today is more a sum of moving parts that need to be orchestrated together perfectly to achieve "quality at speed". Organizations also want to orchestrate tests as part of a release. Test results and quality data can therefore serve as feedback for the quality and risk of the release, as well as the efficiency of IT delivery as a whole.

In this context, one of the ways of having a better view of the continuous testing within the CI/CD pipeline is to use customized dashboards, a practice that is being adopted by many DevOps teams and organizations. These dashboards give insight whether the quality risks that need to be covered have indeed been covered before (parts of) the IT system is (are) deployed to the next environment.

Another promising development is the rise of artificial intelligence (AI) technologies that provide "smart" test orchestration. In the – near – future, with the addition of machine learning capabilities, systems will be able to automatically determine the tests that are required in the release and production cycles.

How do we realize test orchestration?

In order to realize test orchestration in DevOps:

Good orchestration helps create a coherent QA and test strategy across teams and optimizes the use of test automation and test environments. It also gives business owners a continuous view of the actual E2E state of quality in their core processes and applications. This is an approach that covers each activity and task in the release. These activities incorporate both dev and testing and allow testing tasks to be incorporated into each activity in DevOps. Audit trails are compiled as a result of these fully tracked processes. As the release progresses through the orchestrated pipeline, real-time information is available to every person in DevOps in a single source of truth. As each task is completed, it can be automatically moved to the next task if all requirements are met (i.e., if all tests are passed) or the person or team responsible for the next manual task can be automatically alerted, and reminders and alerts are provided and escalated if tasks are taking too long. This shortens wait times and encourages collaboration across teams.

Test automation has been around for about three decades. Most automation frameworks are designed to automate manual steps but are not intelligent. They are unable to react to changes, dynamically generate the resources they need, or understand and interpret results.

In our view, the next step in test automation will be if people think of it less as a capability, and more as a platform – as a broad, connected, and intelligent space. When all tools and functions occupy a common environment, they can talk to one another to drive a full lifecycle value proposition, rather than remain focused on just one particular activity. When that point is reached, test automation will be smart, and broader, business-driven benefits can be given the priority they deserve.

When you want to design a smart automated framework (refer to The World Quality Report), keep in mind that an intelligent automation framework:

"Everything as code" automation

There is of course more than test automation in DevOps. Developing software efficiently, especially with cloud, requires one to automate everything that is repeated. This is done by defining the following as much as possible as code: