Example of pseudo code with coverage

In our magic boat ride example part of the program code that determines the length of the shortest person in the group, could be as shown in below figure in so-called pseudo-code.

How many test cases do we need to achieve full coverage of this code? Would you believe that just one test case could do that? And if so, would you call that "thoroughly tested" (which is the term the Scrum guide uses) [Scrum 2017]?

Let's take a look at code coverage and the different possible coverage levels in below figure. 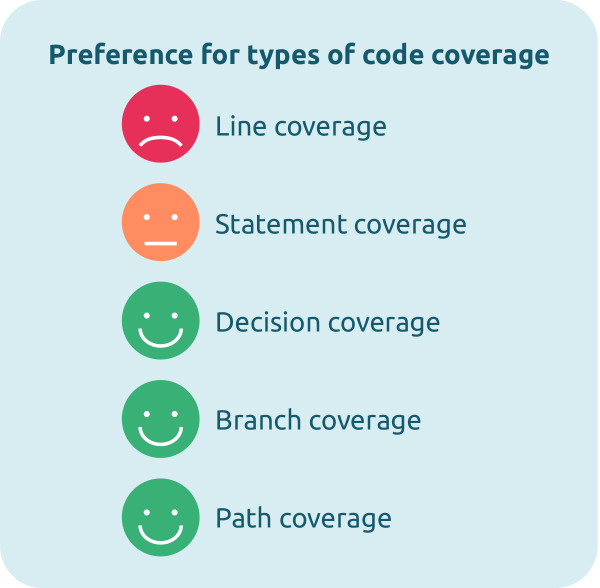 Code coverage can be measured by specific tools during the execution of tests (in other words during dynamic testing). It could also be calculated by walking through the test cases and the code manually, but this is very labor-intensive and therefore seldomly done.

Many people suggest that achieving 100% code coverage is the desired goal. But few people specify the coverage type for which they want to achieve 100%.

We distinguish the next coverage types (and the coverage group they belong to) that are relevant for code coverage:

Let's briefly define and try each coverage type from the bullet list for the example in pseudo-code.

100% line coverage is achieved if every line of code has been exercised by a test case. In the example we use the following values for test data:

We achieve 100% line coverage. Because at least something in every line is exercised, even though for the next line of code:

Only the "IF lop < lsp" is exercised. The statement "MOVE lop TO lsp" is not exercised, but still the line counts as covered.

We achieve 100% statement coverage because all statements have been executed at least once. But the decision in the IF statement has two possible outcomes (true and false). And only one (true) was executed.

100% Decision coverage ensures that all possible outcomes of the decision are tested at least once. In the pseudo code example , we use the following values for test data:

To choose between path coverage and decision coverage the team members will think about whether they just want to demonstrate that every outcome is possible, in which case they would choose decision coverage, or they want to demonstrate that combinations of business logic are covered, in which case the would choose the algorithm test technique using path coverage with TDL-2.

More about these coverage types can be found in the section "Coverage-based testing".

Many tools that count code coverage will just count if a line of code was invoked (in case we do line coverage), but the tools seldomly check if the test case was complete with a check if the actual result was equal to the expected result. Without such a check it is almost useless to invoke the code, because the only thing that is tested is if the program doesn't crash. Only a check of actual with expected outcome can be used to decide if the test actually passed.

So be aware that people may claim 100% code coverage but still didn't do any real test.