An example of a hybrid model is the SAFe model [SAFe 2019]. The integration of QA & testing topics is described in this section.

The Scaled Agile Framework, which is commonly named SAFe, has a so-called "big picture" that describes four levels. We have plotted the testing topics to these levels to assist people in organizations that use agile at scale, to implement testing in their work processes.

SAFe can be implemented in various ways, the main difference being the relevance of the levels. If, for example, the Large Solution level is not relevant in your organization, this level is not implemented. For the way we plotted the topics this does not make much of a difference, every topic will in some way be included in any SAFe implementation.

Everyone involved in SAFe should review this plotting for their own organization, and whenever necessary adapt it to their situation. We are of the opinion that there may be multiple ways to implement the topics in a SAFe environment. 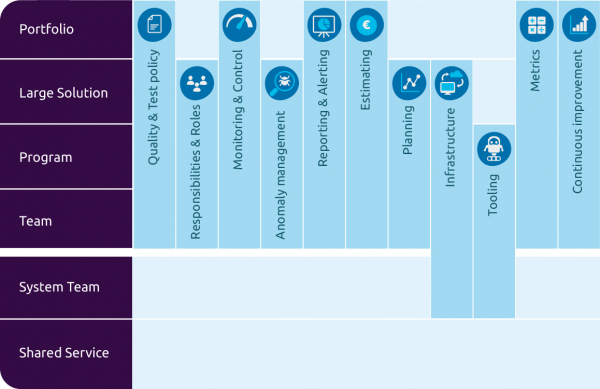 Estimating and planning are often considered to be the same. Although we find that estimating also relates to the portfolio level because budgets are set at this level. Planning and scheduling will be done for the team, program and large solution levels.

Tooling is only relevant within teams and release trains and therefore only relates to the program and team levels. Infrastructure and tooling also relate to, besides some levels, the System Team because this team has overarching responsibilities in supporting the other teams for these topics.

The system team promotes the success of the organization as a whole, by supporting teams in quality engineering through sharing knowledge and skills, and by communicating between teams. 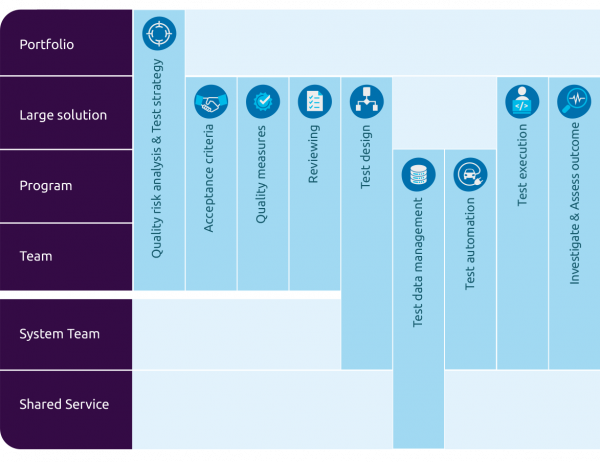 Test data management and test automation are topics that relate to the team and program levels but not directly to the large solution level. These topics will also be supported by the system team. Next to that, test data management is likely to be of interest to the shared services resources.

The other performing testing topics all relate to the team, program and large solution levels of the SAFe model.

For a number of topics that relate to specialized activities the team may call for assistance by one or more system teams or may even transfer the responsibility for performing to such a team.

As mentioned with the organizing topics, for performing topics there is also no generic way in which shared services will be involved. However, we have described that test data management is a topic in which the shared service team is very likely to be involved. For example, to implement data masking and data scrambling in order to comply with privacy rules and regulations.

Other topics that shared services are likely to be involved in are test design (since "system qa" is a shared service) and acceptance criteria (because these are often, partly, described on an organization-wide level).

A test variety in which shared services are likely to be involved is end-to-end testing. Teams often don't have the knowledge, time and resources (such as people and test environment) to properly organize and perform end-to-end tests. A shared service team can organize and perform end-to-end-regression tests and execute such tests on demand of a team, for example after a change is integrated in the main branch.