When deciding on test varieties, many testers find great support in the testing quadrants. There are many different versions of testing quadrants. We have used the original version of Brian Marick [Marick 2003] and the adaptation of Lisa Crispin and Janet Gregory [Crispin 2008] to create our own version as shown in the figure below. 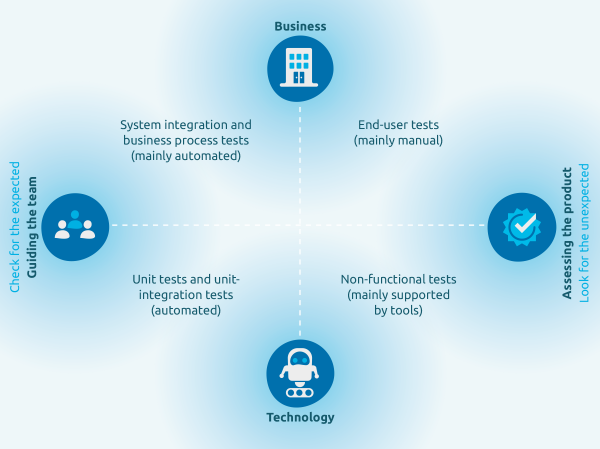 There are four testing quadrants that are the result of two axis. The vertical axis shows the technology perspective versus the business perspective. The horizontal axis is about guidance for the team during the creation of a product versus assessing the product after it is ready.

DevOps teams have to make sure that tests for all four quadrants are organized and performed. This could be done all together or as another extreme in a wide range of separate tests. DevOps teams will often organize three test varieties:

On top of that, the DevOps teams may find that tests for the end-to-end business process are necessary, but they often cannot perform such a test without collaborating with other teams. For example, a special team will be charged with organizing and performing these end-to-end regression tests.