In coverage-based test design we use a number of different terms for specific entities in the test design. There are logical relationships between these entities. Knowing these relationships will help to specify your tests in the best way.

Below figure shows the relationships between the three main entities in a test design: test situation, test case and test scenario. 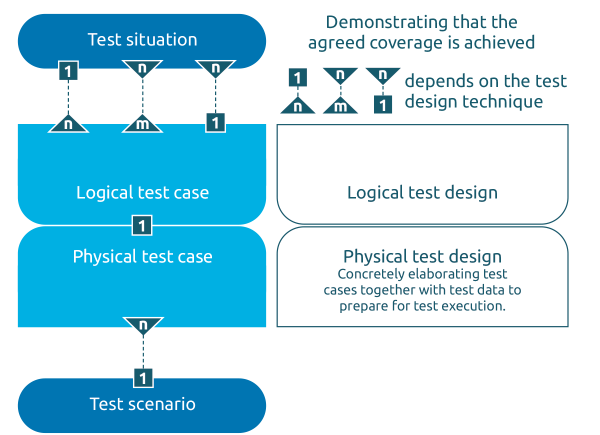 Test situations are derived from the test basis. This may be a document, or it may be input from a stakeholder, for example in a message or an interview.

Sometimes, a team member in a testing role will first design all test situations before taking other steps in the test design. In a DevOps approach the same person would usually concurrently design test situations and test cases and also assemble them in test scenarios.

A test case is used to examine whether the system displays the desired behavior under specific circumstances. A test case can therefore show whether a system indeed behaves as described in a test situation.

Test cases will be created using a coverage-based test design technique or an experience-based approach. The number of test cases per test situation will vary, depending on the test design technique, which in turn is partly influenced by the type of test basis and the results of the quality risk analysis.

above the result is described as logical test cases.

Often, especially in the case of a coverage-based test approach, all tests are first defined and then all tests are executed. This approach requires some structure and order. The physical test cases are therefore grouped in one or more test scenarios.